The kiwi is an exotic fruit from foothills of the Himalayas, and also New zealand. It contains a green pulp hidden by a fuzzy skin, and contains more than two hundred tiny edible black seeds. The kiwi is well known for its high vitamin C content which is far beyond citrus. 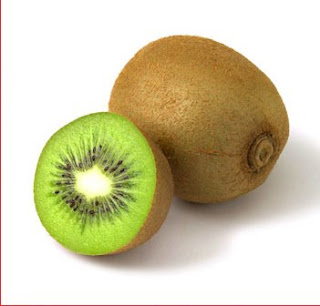 The kiwi is very low in fat (less than 0.5%), contains a moderate amount of carbohydrates in the form of sugars (about 11.5%), and also about 1.5 proteins. The kiwi is a very nutritious fruit as it contains 17 times more vitamin C, 5 times more proteins , 6 times more magnesium and doubles the iron than an apple. Its most important component are:

* Vitamin C: The kiwi’s content of vitamin C almost doubles that of lemons and oranges. A single kiwi covers the recommended dietary allowance (RDA) of this vitamin.

* Other vitamins: Kiwi’s are also rich in other vitamins like vitamin E and vitamin B6, B2, B1, niacin and A.

* Minerals: Kiwi’s are among the most mineral-rich fruits, particularly magnesium, iron and potassium. They also contain a moderate amount of copper. Copper being a trace element, when combined with vitamin C aids the absorption of iron in the intestine.

* Folates: Kiwi’s are also among the richest fresh fruits in folates . These folates are in a amount greater than that in meat but close to that in eggs.

* Fiber: kiwi’s contain 3.4g/100g , most of which are soluble(pectin and mucilage). Kiwi’s surpass most fresh fruits such as apples and plums in fiber content.

The kiwi’s are also very rich in antioxidant vitamins such as E and C. These antioxidants helps prevents cholesterol from adhering to the arterial walls and forming atheroma plaque.

* The high potassium content and a very low sodium content helps contributes to the prevention of hypertension.

* It stimulates the immune system, this is due to its vitamin C content, potentiated by the presence of many other vitamins and minerals that make it much effective than pharmaceutical preparations.

IMPORTANT: Eating kiwi’s regularly, at least one a day, is beneficial for anyone suffering from any type of infectious disease.

* Relieves constipation: kiwi’s are a mild laxative that facilitates fecal movement through the intestine, this is due to their richness in soluble fiber content.

* It enriches the blood thus reducing anemia: The presence of vitamin C, copper and iron accounts for this property .The latter two helps in the absorption and assimilation of iron as well as folates. This becomes true when the anemia is due to the deficiency of iron.

* Benefits mother and the fetus during pregnancy: This is because they stimulate the immune system as well as promote blood production.They are also rich in folates which helps prevent spinal column birth such as spina bifida.

Abbati studied Biological sciences at Ahmadu Bello Univeristy, Zaria. He loves learning about the medicinal properties of foods, and the need to explore them!

View all of Abbati's posts.
Go to mobile version